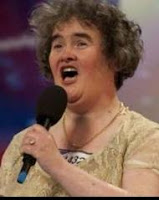 If you haven't seen Susan Boyle's appearance on 'Britain's Got Talent' have a watch right now before reading further: here

Wish I had her chart details as there's something strongly emphasising the healing energy of Pluto in Virgo in her ability to draw all the unkind, cynical, disillusionment right out of us all like squeezing a big spot, leaving us wide open to renewed faith that life really IS a series of sassy sublime moments that are difficult to predict or prepare for, and it's this unpredictability that's actually a source of joy and refreshment rather than something to be guarded about.

The whole thing embodies current planet placements too - Saturn in Virgo in the self contained, mature woman who stands self-approving in the face of massive criticism; rising to the challenge Venus in Aries style: uncompromising and thankfully self-ish enough to maintain self-acceptance rather than be diminished by the sneery suspicion that others are projecting her way. There's also something Neptune in Aquarius/Uranus in Pisces here too, as collectively I think we've been waiting to be won over like this for an awful long time. It answers a deep need for people who can take us beyond the emptiness of conditional approval to unconditional appreciation, which can only happen when what is deemed real, important or necessary about gaining others approval is put to the test. It feels so good to watch Susan win the nation over in such an intense way because it feels so good to watch preconceptions fall away and appreciate another unconditionally. It's satisfying and fulfilling because we're wired that way. 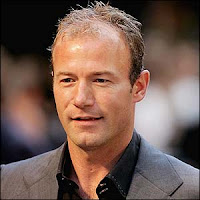 So my Newcastle-United-loving mother thought it was an April fool joke when she heard last Wednesday morning that Alan Shearer was to step in to save the day, to become manager of Newcastle United (story here). I had been saying for a while ‘you mark my words, something is happening with Newcastle, their chart is doing stuff’; I knew that Venus had turned retrograde right on Newcastle’s Jupiter, but I couldn't picture what a retrograde Venus/Jupiter alignment would look like for a club who seemed on such a downward spiral to certain doom. But it turns out the picture looks something like when Dr Who turns up right at the last minute when the daleks are yelling ‘exterminate’and the music turns all bouncy and relieving.


To recap, this is part of a story that began last September when manager Kevin Keegan left after bitter rows with bosses (reminder here). Club owner Mike Ashley upset everyone by refusing to restructure the management hierarchy, and let Kevin go instead. It was all very similar to that bit in Young Victoria when Queen Victoria wouldn’t change her ladies-in-waiting despite public pressure, and the public just went crazy, rattling at the palace gates and all sorts. Mike Ashley, just like Queen Victoria, didn’t dare show his face at the palace gates for a long time, meanwhile hiring a temporary manager, Joe Kinnear. Joe is a Capricorn, and he arrived at Newcastle just as Pluto, ruler of complete and utter transformation, arrived in the sign of Capricorn; and Saturn, ruler of Capricorn (associated with bosses and management and hierarchy and structures) began its alignment with Uranus, planet of the unexpected (especially unexpected anti-social, anti-media out-of-the-blue outbursts like this one from Mr K).

Then, right when Saturn was having its second alignment with Uranus, Joe Kinnear was taken to hospital on the 7th February, and had to have major heart surgery. Turned out he’s going to be fine, but it left Newcastle without a manager again. Unexpected and very Saturn/Uranus, but it also happened during the beginning of the ‘shadow period’ of Venus retrograde.

A retrograde phase is when a planet appears from our perspective on earth to be moving backwards. It’s not really, it just appears to be from where we are standing. And so it looks like it is taking backward steps through the degrees of the sign it has just been moving forward through. In this case:

Feb 3rd 2009 - Venus reached 29 degrees of Pisces (beginning of 'shadow phase')
March 6th - Venus travels to 15 degrees of Aries and turns retrograde (appeared to turn around and move back on itself)
April 17th - Venus returns to 29 degrees of Pisces (that is how you get the shadow phase degree - its the degree that Venus moves back to before stopping to turn 'direct' again)
May 21st 2009 - Venus retreads path to 15 degrees of Aries, crossing that March 6th turnaround point, finishing the full cycle by May 21st.

The thing with astrology is you look for similarities or meeting points, between the progress of an event and the progress of the planets in the skies. That's what I am looking for all the time as an astrologer: alignment between planet degrees, chart patterns, and events. That Joe Kinnear was taken out of the picture as the shadow phase of Venus gets underway, implies to me that the whole of the retrograde cycle is going to be important somehow in the chart of Newcastle United. But how? Well firstly you look for ways Venus is important in Newcastle’s chart, and you can also look for how the retrograde cycle hits the planets in the chart.

First thing I noticed was that Venus was going to slow down to a stop and then make its turnaround early March, right on Newcastle’s Jupiter. Click the chart to the left to enlarge it, and find the red symbol, what looks like a red number 4, at the 5 o’clock point on the chart. That is Jupiter at 15 degrees of Aries. So on March 6th Venus is due to stop and turn around right on that point. And astrologically it does symbolise a turning point, or turnaround in affairs. Jupiter is the planet of expansion, upliftment and (traditionally) ‘good fortune’… with a retrograde happening over it, it might be fair to say the symbolism could be a reversal of fortune, and as Newcastle has been right in the mire as far as luck goes, the interpretation becomes ‘a reversal of bad fortune’ (Not that I actually believe in bad luck; I am just talking about how any astrologer reaches for images and metaphors that describe the story of what they see going on – it’s ‘like’ a story of bad luck reversed, rather than literally saying bad luck exists. Alan Shearer isn’t really Dr who and Mike Ashley isn’t actually Queen Victoria, etc etc, it just describes the story).

So anyway, Jupiter is one point, and the other is Newcastle’s north node, which is in Taurus, the sign ruled by Venus (it's the little green arch symbol to the right of Jupiter in Newcastle's chart). The north node point is one of my favourite points of a chart because interesting things ALWAYS happen around it, and especially around the planet that rules the sign the north node is located in. The north node is associated with the moon and longterm cycles in the progress of events (especially 19 year ones, and if anyone knows what was happening to Newcastle 19 years ago, let me know), It’s known traditionally as the ‘destiny’ point in a chart – and the ruling planet of that point can show how that destiny is shaping up, or in other words, how desires and intentions set in motion are moving forward to fulfilment. In terms of Newcastle’s chart, this means the movement of Venus mirrors their progress toward fulfilment of the clubs intention or ‘destiny’ that was held at the moment of its creation or birth back in 1892.

When Joe Kinnear took ill, Venus was at 4 degrees of Aries, in alignment with Pluto (radical transformation), and his Capricorn sun. This 4 Aries point is the degree that Venus was due to return to on April 1st as a result of its retrograde motion, and it was April 1st that the announcement was made that Alan Shearer was to become temporary manager till the end of the season. Looking at the chart of that day as it lines up with Newcastle's (click to enlarge chart on left...symbols in pink are the placing of planets in the skies on April 1st 2009; black symbols are where the planets were the day Newcastle United was created), you can see the big red square in the centre of the circle that is formed by the cross alignment of Newcastle's north and south nodes of the moon, merging with the current placing of the north and south nodes. In astro language, that means big stuff is going on. Nice stuff.

I looked at Alan Shearer's chart last September when Kevin Keegan left, and the stand out point at that time was his career indicator (MC) is where his Venus and Uranus are placed, in the sign of Libra, which Venus also rules. I had kind of expected him to step in suddenly last year (Uranus = unexpected or sudden, and Libra is the balancer of what is out of balance), but it didn't happen. Yet this astro picture of April 1st seems more fitting, as his 6 Libra Venus is opposing the 4 Aries Venus (approx the 11 o'clock and 5 o'clock points on the chart on the left, pink symbols are April 1st skies); as well as lining up nicely with the nodes of the moon at 7 o'clock point, while Pluto sits right next to his Capricorn moon at around the 8 o'clock point, in turn lining up with his Virgo/Pisces nodal axis (the arch symbols at top and bottom of chart).

Astrology always reveals that things happen at just the right time, though it's always with hindsight that the bigger picture reveals itself fully. And so Newcastle United have got another saviour right in the nick of time, and I hope it all works out for them. Though whether or not Alan Shearer will stay after the Venus retrograde period ends in May I don't know; I hope so, as his chart works so glitteringly well with Newcastle's, but for now anyway my mother is a very happy woman and that's what's most important really :)

oooh how lovely, Spring is here and so are your April horoscopes, posted at this site