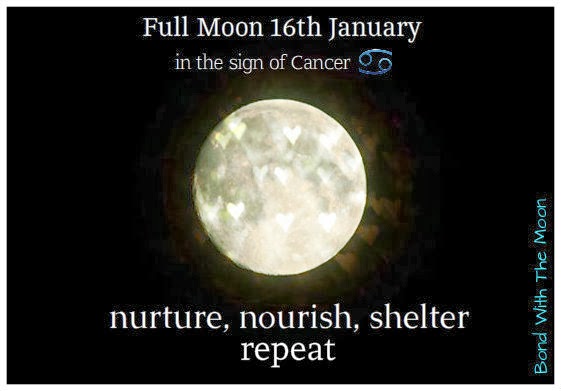 The first full moon of 2014 is at 04.52am, UK time, on Thursday 16th January. It's the annual full moon in Cancer, a sign that links to home and hearth, parenting, children, comfort zones, safe spaces to grow, and safe places to dwell.

Over the next few days, while the moon looks full in the sky, moodiness, neediness or restlessness might be amplified (as well as full moon insomnia) because moon in Cancer especially amplifies emotion, and therefore doubts and fears, around unmet needs or lack of fulfilment.

Be kind to yourself (and others) regarding your hunger for 'more' from life, whatever it might be. Soothe inner doubts and fears of never receiving more or better, as that's just insecurity talking. Instead, talk yourself into comfort and peace of mind regarding what is left to do or receive, or what you don't know how to do or receive.
Allow yourself to feel all feelings; to accommodate and accept them, to be compassionate about your own discomforts, rather than feeding them to silence them with habits such as comfort eating/drinking/shopping etc.

Moon in Cancer is a sensitive, deeply emotional and connecting time; it symbolises both your inner child and inner parent and how the call is to recognise and be both to yourself. Nurture, nourish, shelter, repeat.
Posted by Barbara Palliser at 11:28 pm No comments:

I have a page on Facebook that I have just started, called Bond With The Moon. It's not restricted to astrology, there's going to be tarot, healing, sacred geometry and all kinds of lovely spiritual stuff. This is a recent photo post. Visit and 'like' if you like :) 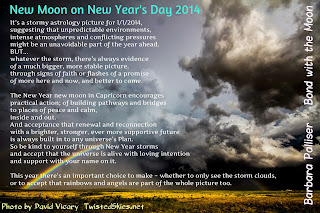 Aries
21st March - 20th April
Long-term plans and ambitions have got your attention right from the start, inspired by a transformational new moon on New Year's Day. The success of plans requires a letting go of the past somehow, in order to reveal your new future, and this requires acceptance that there's much you can't control in situations right now. Which means keep trusting the process no matter what, and give things time to work, because despite the rather clunky unfolding of events during January, there's a delicate balance to be reached; it's the satisfying soft click of everything falling smoothly into place that you are really after, rather than a pushy, hurried, empty victory.

Taurus
21st April - 21st May
Certain relationships are occupying, even obsessing your thoughts, especially as 2014 first gets going. There's a very powerful new moon on the 1st, which is about gaining new perspective on all this, or rather, a renewed sense of faith; it's evolving from all the challenges you've been facing that might feel emotionally intense, but that has become a satisfying journey of self-development and personal progress. There's another tangible turning point around the 30th when your ruler Venus ends retrograde phase (appearing to move backwards), which suggests looking forward with the wisdom of your experience as your guide, and the power of your perspective at full charge.

Gemini
22nd May - 21st June
The new moon on January 1st is a powerful time for healing and renewal. Despite the intensity and complexity of many situations it's not the time to hide under the duvet till it all goes away, and no forcing things into place (and it's so tempting!), it's about stepping up and staying present on what you want, while not needing to control circumstances. Push and the world pushes against you. Relax and the world softens and yields to you. So get comfy with uncertainty, light a candle and breathe if you're feeling too much in the dark about everything, then enjoy watching how January starts falling into place.

Cancer
22nd June - 22nd July
You connect easily with the lunar moods, its ebb and flow, and light and shade cycles; and the new moon on the 1st represents a powerful new cycle for you in certain relationships, which has been building for a while. It's recognisable in how things are evolving not ending, and transforming not crumbling away to nothing. Around the 6th/7th you need your freedom though this doesn't mean act on restless impulse (especially at work). On the 16th the annual full moon in your sign is about taking stock and taking score; then another new moon on the 30th indicates a positive turning point for friendships and family matters.

Leo
23rd July - 23rd August
Health and fitness, work and daily schedule is at the forefront for January but especially so around the potent new moon on the 1st. The planets are packed tight together that day, suggesting a concentration/focusing of your energies and responsibility towards progress in those areas of your life; and you might feel the pressure is on, especially when it comes to work. Look for a turnaround or turning point from the 30th, when assessments or delays end, and things can move forward. Also on the 30th there's a beautiful new moon in your relationship chart bringing a loving sense of freedom and friendship your way.

Virgo
24th August - 22nd September
The new moon on the 1st is a powerful symbol of change and transformation for you, and to get the most out of the intensity and emotion of this and the New Year period, be open to the idea that too much control of situations isn't helpful. Control includes anything like pushing or shoving outcomes into place, denying that things can work out well, or denial that there's flexibility and options; basically, control is getting in your own way and hampering your process instead of stepping back and trusting it. Fear of losing what you really want is at the heart of it, so transform that fear rather than act like it's a possibility.

Libra
23rd September - 23rd October
Home and family matters, the past, nostalgia, and your current comfort zones are all under the spotlight of a powerful new moon on the 1st. New moons are about new beginnings, though this one also speaks of beginnings as a process that takes time and which won't be rushed. Emotional intensity, renewal, communication and responsibility are the keywords in key situations this month (especially around 1st, 6th and 10th). Don't try to control the uncontrollable (which is nearly everything it seems), or try to move against the tide (especially 16th). By the 30th your ruler Venus indicates a turning point in this and easier movement forward again.

Scorpio
24th October - 22nd November
Lucky that you're at ease in emotionally intense situations or those with tricky dynamics because that's the name of the game as 2014 gets going. It might be because of the time of year too, meaning you're in the mood to finish unfinished business and clear the clutter of old and tired emotional debris. A new moon on the 1st indicates powerful and transforming communication, and getting the message across has never felt so utterly necessary. Relationships, contracts and negotiations are indicated to move forward at the end of the month, so don't push for commitments before then unless the timing feels especially right.

Sagittarius
23rd November - 21st December
A general theme for January is finding the right balance between sharing and caring for others, and being disciplined about your own resources. The unusually powerful new moon on the 1st indicates new feelings of responsibility and also awareness of limits. As there's no right or wrong in this, it's all about comfort zones and what feels best, so any deep or difficult feelings are there to help guide you in this. By the new moon on the 30th, there's a sense of important change and transition underway; it's important to remember this is all ok, and yes, there's more good stuff to come.

Capricorn
22nd December - 20th January
All the big planet action takes place in your sign this month; and it's big. A new moon on the 1st and what happens around it is about the continuing transformation you've been going through for some time: the personal make-over, the evolution of who you were into who you want to be. The new moon is a symbol of a new phase in this, as is the brand new year, so there's a lot of 'new' (unknowns) to process and allow, and a lot of old (familiars) to gently let go of. Your interactions, relationships, and current circumstances are assisting you to do that through January, so trust the process and the timing.

Aquarius
21st January - 18th February
It's a powerful and reflective start to 2014; you might feel you need more time than usual to yourself, to process and make sense of everything, so being selective about who or what you allow into your space is going to serve you (meaning be choosy about tv programmes, news stories, gossip, and negative people, etc; especially around the 6th when it's hard not to react rather than respond) Communication planet Mercury is in your sign from the 12th, which indicates clarity and the logical approach (especially 25th). Then a new moon in your sign on the 30th has a window of opportunity. It's a big window.

Pisces
19th February - 20th March
An emotionally intense new moon on the 1st focuses on situations involving friendship, teamwork, and dreams/ambition for the future; and there's a lot happening within that on the themes of responsibility, rebirth, renewal or regeneration. January is a positive (if sometimes pressurised) month and you can't hurry through it as much as you'd like to. The asteroid Chiron which links to healing is in your sign, with the message to take your own medicine/advice, and don't overdo it, even though you're being pulled in different directions at once (especially 5th, 16th, and 29th).

Posted by Barbara Palliser at 3:14 pm No comments: