Update: It's not the end of the world (part one)

Remember that day last December when everyone thought it was going to be the end of the world? December 21st, the end of the 5000 year cycle in the Mayan calendar? Gave a few people the heebie jeebies? Made a few news readers crack that 'fun' smile they normally keep for ufo stories?

The pic below (click to enlarge) is a reminder of what the sky looked like that day. The big pointy triangle is a Yod, aka finger of fate or finger of God, which was part of all the hoo-ha, as complete Yods are less common than other planet patterns (this is when they have a central line running from point to base within the triangle, formed by two planets standing opposite each other). 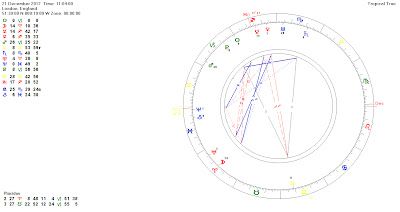 Anyway turns out of course it wasn't the end of the world, but it felt like it to me, as this was the day I was diagnosed with grade 3 aggressive breast cancer. How mad is that? I do pick my days! And it wasn't intentional to be in hospital that day, believe me; I was supposed to be getting the Christmas turkey from Marks and Spencer, but instead I was being fast tracked in for tests to avoid holiday delay; and I suppose a yod is not known as the finger of fate for nothing.

The reason I am mentioning this is not just coz it's an unlucky coincidence, but because I am intending looking at some of the astrology of my journey from that day. There were some interesting links between my chart and the Yod chart, and I am noticing that it doesn't end there... events since then are being described perfectly in planet patterns time and time again.

So, I am intrigued enough to go public and make some notes. It's taken me this long to get started coz I am well out of practice blogging! I also had surgery early January to get rid of the tumour and am just feeling back to normal now. I plan to look back at some of the significant events over the past few weeks, including the different kinds of healing I am embarking on; I also have chemo and radiotherapy to go yet, so am curious as to how astrology is going to be playing out during this time for me.

I have decided the message from the universe about my diagnosis was 'it's not the end of the world', but I don't know quite how I feel about seeing the whole thing reflected so vividly in my birth chart and in the current sky map; maybe I will find out the more notes I make? Anyway, that's all for now, more to come soon.

Labels: breast cancer, Cancer, it's not the end of the world, Yod

Aries
21st March – 20th April
Your ruling planet Mars is in the mood to go with the flow till midmonth, which sounds a paradox as Mars, like Aries, is a feisty, furious force to be reckoned with, and likes full freedom to follow the call of the latest challenge rather than allow space for others to lead the parade, but it’s all about timing, and midmonth is about the time being right for challenge and action. February is also a social month; a new moon on the 10th symbolises new or renewed friendships; and love and romance has friends as a theme and firm foundation for what comes next.

Taurus
21st April – 21st May
Career and ambition is a strong focus for you from the 2nd, with opportunities emerging around the 6th and a new moon on the 10th symbolising new or alternative choices and decisions to be made regarding this area of your life. There’s also indication of more involvement with groups, gatherings or teams; anything with a shared purpose or collective goal, and from the 23rd there’s the chance to reconnect with places or faces from the past linked to this too. Valentine’s Day looks sweet for romance, though someone’s got their sensible head on, especially after the 18th.

Gemini
22nd May – 21st June
Its full steam ahead this month for career and long-term plans and projects (try not to over reach or over react around the 9th), though it might seem that there’s delays or setbacks at times, especially from the 23rd once your ruler Mercury retrogrades (appears to move backwards) but you’ll find there’s method to the madness as there’s plenty of potential in alternative routes and directions you wouldn’t have noticed had there not been a few (temporary) dead ends, diversions or digressions to encounter. Romance transforms rather than blossoms, and you’re reviewing and reconstructing your approach to health and fitness from the 18th.

Cancer
22nd June – 22nd July
There’s an emphasis on travel and education this month, which can also link to work and career (especially during the first week), but there’s also the idea of travelling and learning as a kind of spiritual journey that broadens the mind and opens the heart to a sense of bigger picture. It’s a sense of oneness you seek out this month, a resonance or familiarity with certain people or places that feels full of information about yourself; all very deep and meaningful perhaps, but enjoyable and enlightening at the same time.

Leo
23rd July – 23rd August
There are signs of important new beginnings within key relationships this month, symbolised by a refreshing new moon on the 10th, so don’t allow restrictions or limits from other areas of your life to impact your feeling of freedom here. Friends are super supportive at this time too, and offer wise insight. Around the 18th your focus shifts more to matters of security, and it’s your own insight and instinct you have the urge to put first. Full moon on the 25th mixes money and friendship in a very healing way; it just needs some balance.

Virgo
24th August – 22nd September
Harmony seeking Venus moves into the problem solving area of your chart from the 2nd, suggesting certain ruffled feathers are being smoothed this month, though there’s still some communication blocks to dissolve, especially around new moon time on the 10th, but in general this is definitely a solution orientated month, and also an important month for relationships too as lots of planets are lining up to suggest your attention drawn deeply in that direction. On the 25th there’s a full moon in your sign that brings out your nurturing side, despite a possible work related stalemate situation.

Libra
23rd September – 23rd October
Your creative focus is strong this month. Yes it’s all about unleashing your inner artist, but it’s also the art of enjoying yourself so don’t forget to have fun too. It’s maybe the second half of February where you look more at the logistics of this, as it is creative vision mixed with practical strategy that really moves you forward. Don’t be afraid to spend time reviewing and revising your approach either, meaning don’t mistake a change of mind or direction for lack of self-discipline or lack of forward-reaching focus. Trust the ebb and flow of how things feel, and accept when things feel right.

Scorpio
24th October – 22nd November
Saturn has been in your sign for some months now, which for example has indicated events cropping up that improved and transformed your communication style and patterns. It also symbolised events calling for your strong, supportive side, and while you were called to support someone else, you also received the benefit of your strength in full flow, renewing confidence and a sense of security. From the 18th until July, Saturn retrogrades (appears to move backwards), indicating a review or restructuring of your responsibilities. Maybe others don’t require your support so much, or perhaps you could do with some yourself. Whatever, Saturn retrograde sorts it.

Sagittarius
23rd November – 21st December
It’s all about communication till midmonth; specifically on acquiring or updating related technology: phones, comp, etc., as indicated by the future focused new moon on the 10th. Even though your priority is the fun and entertainment of it all, around the 15th you’ve got your sensible head when it comes to finance and purchases, so your timing and instinct might be better than around the 9th when your penchant for blind leaps of faith into any situation knows no bounds. There’s a busy full moon on the 25th, suggesting a focus on home and family; with reconnections or reunions from the 23rd onward.

Capricorn
22nd December – 20th January
Your ruling planet Saturn is due to retrograde on the 23rd, till July (where it appears to move backwards). It’s an annual event, and indicates a time of review or assessment, and the chance to see certain circumstances from a different point of view somehow. This retro period looks to be particularly helpful for you regarding your association with groups, gatherings, teamwork and certain friendships. Your participation points to renewal and rebirth, and maybe some plans for productive restructuring or re-arranging an existing set up, as a result of your involvement.

Aquarius
21st January – 18th February
Venus moves into your sign from the 2nd, and is part of a stylish, cutting edge planet alignment on the 6th, suggesting great communication, positive expansion and compatible relationships. There’s a unique new moon in your sign on the 10th too, which helps you look more closely at yourself in the mirror to better appreciate whatever is the difference between you and others. Money matters come strongly to the forefront from the 18th, maybe under some confusion till the 23rd. Long-term plans (especially career) are important too, as there’s restructuring going on from the 18th till July, which will benefit your plans enormously.

Pisces
19th February – 20th March
It’s an unusually busy month for Pisces (but wait till March!), symbolised by up to six planets hanging out in your sign by the end of the month. Lots of planets in one place like this means lots of energy and focus being channelled through you into many areas of your life at once. But far from feeling depleted, you’ll be energised, and that is the key message for Feb for you: the more you do the more energy you will have to flow. It’s a magical month too at times, symbolised by an enchanting full moon on the 25th designed to make dreams come true.
Posted by Barbara Palliser at 11:22 am No comments: