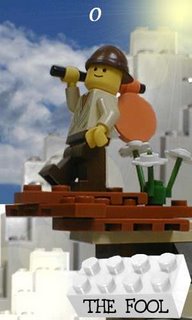 I've been studying and working with Tarot for many years now, and have collected quite a few decks in that time. But how can any other deck compare to Chris Doyle's LEGO deck, which is unfortunately unpublished, but viewable online in full at this great site.

And if you're someone who gets a bit spooked by some of the heavy imagery associated with Tarot, the LEGO version might help ease nerves and put it all in perspective. Here are links to a couple of the traditionally more scary images, the Death card and 10 of Swords.

The rest of this site is great too, especially the Mini-Mizer, which I've found is a soothing antidote to the limbo of writers block :-)

Here's an interesting blog for my friends in the US... the Weather Alternative is the weather forecast using astrology! How about that!

I have been wondering whether astrology could have any bearing on the weather since I noticed that just before a full moon, or at the time of solstices/equinoxes, it often gets windy. Now this might just be where I live, but it's something that got me thinking...

This is from the introduction to the site:

Johannes Kepler, the 17th century astronomer and discoverer of the planetary laws of motion, experimented with what today would be considered an alternative forecast method that made long-range weather forecasts possible. Kepler observed that the angular relationships among the planets coincided with the formation of weather systems here on Earth that, in turn, produced storms, droughts, floods, etc. His first brush with fame came not because of his breakthrough regarding the planetary laws of motion but because of his accurate long-range weather forecast of the severe winter that put Styermark, Germany on ice in 1593. Since the planets move in repetitive cycles that can be known beforehand, he reasoned, the weather induced by them can also be known beforehand.

Posted by Barbara Palliser at 10:35 am No comments:

Eris - Spanner In The Works Or Catalyst For Creativity? 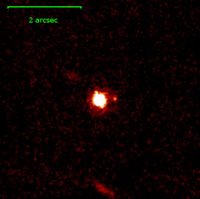 Planet 2003 UB313, also known as Xena, has been officially named Eris. In myth Eris was the goddess of strife and discord, and has been given this name because of the debate the discovery of this planet started, that led to the reclassification of the known solar system.

Goddess Eris was best known for starting the Trojan War, after she was so miffed not to be invited to a wedding that all the other goddesses were attending. She wasn't welcome because she was a troublemaker; however by trying to exclude her from the wedding party they made things a whole lot worse for themselves. Eris threw to Hera, Aphrodite and Athena the apple of discord , which had the inscription 'to the fairest one', and let nature take its course. After squabbling amongst themselves it was down to Paris to make the decision. His choice of Aphrodite had the domino effect of events that led to the Trojan War.

So this is a goddess that you ignore at your peril. She's no victim and won't be pushed aside. She doesn’t need Patrick Swayze to save her with a 'nobody puts baby in the corner' kind of line. It was the competitive instinct of the other girls that she capitalised on, so she's also clever and knows what makes people tick.

And she has also inspired her own religion. Discordianism, founded in the mid 20th century, believes that chaos is as necessary to the universe as harmony. Its sacred text, the Principia Discordia or How I Found The Goddess And What I Did To Her When I Found Her, is ‘dedicated to the prettiest one’, and begins:

We
are a tribe
of philosophers, theologians,
magicians, scientists,
artists, clowns,
and similar maniacs
who are intrigued
with
ERIS
GODDESS OF CONFUSION
and with
Her
Doings

Read more about Eris inspired Discordiansim here, and read the text online at this great site.
I have to admit this post is late because I lost myself for hours in there. I was utterly fascinated. Never been a one for religion of any sort, but I think the Principia Discordia has just what I've been looking for from a sacred text...

Eris moves slowly through the zodiac, and has been in the sign of Aries for decades (Hence the Xena warrior nickname was very apt), but you can find out the exact degree Eris occupied at the time of your birth with this wonderful online ephemeris here.

Better Out Than In...

... so said 17 of Tony Blair’s own men as they tried to force the issue of his retirement as leader of the Labour party, by pushing him to set a date. This coincided with the lunar eclipse, an event that traditionally signifies important or ominous happenings to influential public figures.

A lunar eclipse happens during the full moon, when the sun and moon are on opposite sides of the zodiac. It’s a time when the cosmic energies stretch to their max between two points, and in the tradition of ‘as above, so below’, the events here on earth follow suit, along with a characteristic sense of tension and irritability.
Any full moon tends to push for the 'enough's enough' point, but mix it with an eclipse and you get a fed-up feeling that brings events to a head, with far-reaching implications and long-term impact.

This eclipse energy certainly pushed the Labour party to breaking point, with the resignation of 7 of the 17, followed by a photo of a grinning Gordon Brown that fuelled rumours he had orchestrated the whole thing in an effort to clear his path for a straight run at promotion to Prime Minister.
With Charles Clarke’s opinion about the Brown photo as being ‘a stupid, stupid thing’ to have done, it became clear that full moon madness had descended on the Labour party with gusto, and internal chaos publicly polarised the camp between Blair supporters and Brown supporters, mirroring the cosmic tension happening simultaneously in the skies above them.

An outward impression of peace fooled no-one today, with one journalist describing the situation as being ‘as calm and serene as a sackful of ferrets’.

Normally I have the attention span of a goldfish when it comes to politics, simply because I just can't tolerate the lies, spin and manipulation, but this has been a rare treat - not just because the whole affair has demonstrated the ‘as above so below’ theory of astrology with such precision – but because it was also a reality show peek into the clearly edgy relationship between Blair and Brown, that under lesser astrological conditions would no doubt have remained hidden by spin.

As usual, Blair the typical Taurean has refused to be pushed by anyone into anything, especially the issue of retirement, though he has mentioned June next year just to keep hounds at bay. This is the timing of the last Saturn/Neptune opposition, and is also just a few short weeks before the UK chart hits its Saturn return - the end of a 30 year astrological cycle and a key point of transition in any chart. It’s also the time when Saturn conjuncts Pluto in Blair’s chart for the final time, ending a yearlong transition of his own.

However Brown’s supporters would prefer to plan a Christmas leaving do. Brown is a Pisces with north node at 20 degrees of that sign. Currently the north node is at 25 degrees of Pisces, which means it reaches the 20 degree mark in December, so this date suggests a significant time Brown, being the beginning/end of an important 19 year cycle.
I always look to see what the rulers of the nodes are up to in a chart for more information on how this cycle will play out, and with Brown having north node in Pisces the ruler is Neptune; therefore it’s the Saturn/Neptune opposition that describes the manifestation of events connected to the future development of this cycle.

So whether it’s December or next June, it appears it’s the Saturn opposite Neptune symbolism all the way.

I am just so sad to hear about the death of Steve Irwin. He was an incredible personality, and I loved his utter devotion to the kind of creatures that would make most of us run a mile. His enthusiasm was infectious, and I laughed a lot and learnt a lot while watching his TV programmes. He made it all fun, which is the mark of a truly gifted teacher.

Have heard it said the accident on Monday was ironic in a sense because it wasn't involving a 'dangerous' creature, but I feel this isn't irony; it has a rightness to it, because his skill lay in handling those dangerous creatures; he understood them so well that an accident was never going to happen that way.

I had a look at his chart, and I noticed the Saturn/Neptune opposition at the degree of his North/South node in Leo/Aquarius. April Elliott Kent at Big Sky Astrology Blog also notes the heavy presence of Jupiter at the time, often a feature of charts involving time of death.

I became fiercely protective of Steve Irwin when that offensive gaggle of do-gooders complained about him holding his baby sort of near that crocodile. How typical of that type to take that stance. How dare they assume they knew better than his years of experience. But anyway, they arn't important now. I just want to remember him for making me smile with his exuberance and big personality, and for inspiring me with his passion for his subject.