This annual full moon in the mystical, dreamy, sleepy, peace-loving sign of Pisces is an unusually strong healing moon, so go with the flow and get on the Pisces wavelength for the next couple of days, whether it’s through art, meditation, music, nature or a good snooze… surrender your senses to that unmistakable feeling of witnessing a sensational sunset, a smiling baby, or the power of your favourite music. You know that feeling - it’s uplifting, heart-opening, a recognition of oneness, and connection with something pure, profound, awesome and REAL - very real, yet indescribable, uncontainable, and ineffable.


What is being healed with this full moon is the idea that this energy, this Spirit, this experience, is somehow wispy and weak compared to our big, bold, rough and tumble world of logic and scientific certainty. Quite the opposite, it’s what holds us secure enough to create even a rough and tumble world, and it’s what holds us all together to play within that world. God’s glue.


This rare healing moon is about peeling back the layers of self-doubt and disbelief, to find underneath only the gentle velvet touch of unconditional Love and its oneness/awareness with all the universe. It’s who we each are underneath, in our own unique and magnificent ways. We often let ourselves peek into the mirror that is this physical universe, at the beautiful sunsets and babies and music that are reflected back to us, and we feel the appropriate awe and reverence of it all, but we often don’t realise it’s also us we are sensing. Oneness is a tricky concept; if you perceive magnificence ‘out there’ it’s your own magnificence you are feeling. Confused? Doubtful? Let the full moon in Pisces be your guide... 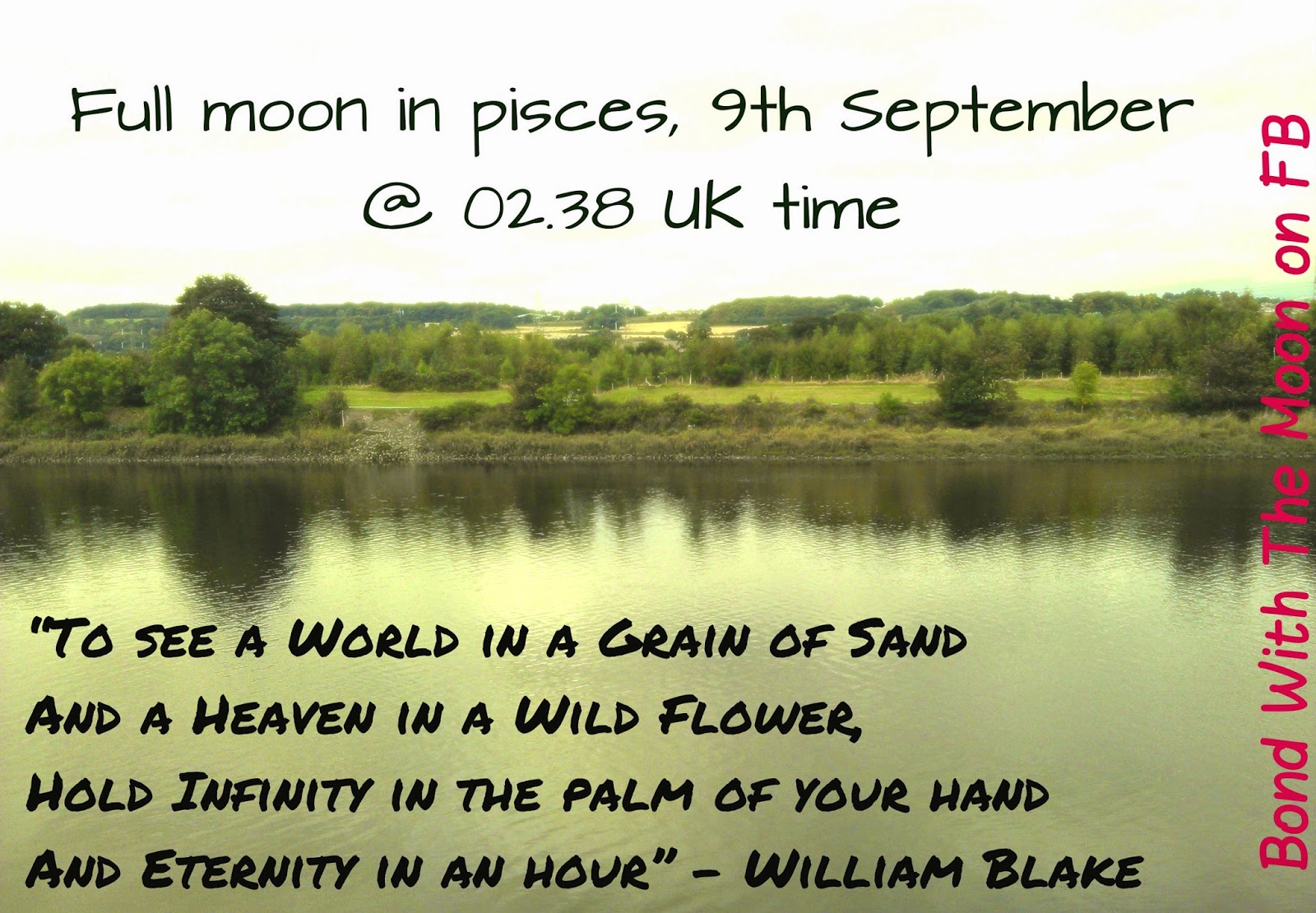 Posted by Barbara Palliser at 8:57 pm No comments:

September already! Here are the horoscopes for this month...hope you enjoy and thanks for reading x


Aries
21st March – 20th April
So much is happening behind the scenes this month, which can mean you are the one working away from the spotlight, or the one left to wonder how things can work out for you (the answer is ‘like magic’). Old hurts and wounds might be reactivated, particularly at full moon time around the 9th, but the intention is for healing, so choose to make peace with things to benefit from these valuable vibes. Relationships, contracts or agreements get your attention, especially around the 23rd and 24th, under the Equinox and new moon, indicating the beginning of important new partnerships, and a new sense of harmony and balance.


Taurus
21st April – 21st May
You are now in the right position to reap rewards of earlier work and effort. Keep your mind open and receptive to the flow of good things into your life and watch how the universe delivers. Your planet is Venus which loves to value people, places and things, and the full moon on the 9th is a symbol of the promise of much more of this to come; there are always ups and downs, and the key is to not take the down times personally. That’s a challenge after midmonth (especially around 24th) as it’s easy to focus on what felt unfair, but balance it by pondering your recent achievements.

Gemini
22nd May – 21st June
A recent time of rest and renewal has done wonders for your soul, meaning you feel more clear and connected than ever. Recognition and respect is coming your way (maybe long overdue), symbolised by the beautiful healing full moon in your ambition chart (around the 9th); and midmonth Mars, the planet of drive and desire, moves into your relationship chart, suggesting sharp and purposeful action around love, contracts and agreements. An AMAZING new moon at Equinox time on the 24th is about justice; a fair balance of the scales at last. It’s also about fun, entertaining and creative times that are here to stay for those who want and believe it.


Cancer
22nd June – 22nd July
Recent experiences felt enlightening and insightful, so in general you’re happier and more optimistic, and certain situations look more sorted and balanced as September gets underway. A powerful healing moon on the 9th is about concentrating on the journey rather than the destination; or the process rather than the outcome. Midmonth is about matters of the heart, and getting in touch with values and priorities in relationships, and discussions are detailed. A very important new moon on the 24th indicates a very important new start. You might be temporarily reclusive until emotionally settled about what that might mean for you.


Leo
23rd July – 23rd August
Plans have needed patience for some time now; September shows that it has all been about good timing, and about having the confidence to hold your nerve until the time was just right. Midmonth you should be seeing some results about this, especially linked to home and family matters, and also about work and career plans. Energy builds to the powerful new moon on the 24th, which ushers in a new era for harmony and resonance in communication; if you have been asking for peace, fairness and justice in certain situations then this might be the start of something interesting.


Virgo
24th August – 22nd September
There’s a powerful full moon in your relationship chart on the 9th that speaks of emotional healing. It’s about the power of compassion and acceptance to heal conflicts or pain, and about how criticism or negative judgments keep hurts and wounds open. Wishes are granted regarding solutions and reconciliations but it never happens from justifying or pushing your point (however right you may be). Trust your intuition midmonth as you are spot on and you can sense what lies behind metaphorical closed doors. Final week there’s a fabulous financial-themed new moon, and you might prefer your own company, in order to sort and process your thoughts.


Libra
23rd September – 23rd October
Hold your nerve if things feel right to you at the moment, meaning don’t let anything cast a shadow over where you are on an issue or circumstance, as the light at the end of the tunnel is definitely getting bigger, and you’re moving in the right direction. You might see evidence of this in events from midmonth, as there’s a sense of balance and harmony with you that comes from choosing and moving with the courage of your conviction. A super-charged new moon in your sign on the 24th supports this, and suggests you are taking any further challenges in your stride.


Scorpio
24th October – 22nd November
The right mind-set is so important and the planet pattern for the first half of the month (especially full moon time around the 9th) is all about soothing, calming and dissolving old hurts and regrets that might have held your attention on the past rather than your present and future. Pluto is your planet, and it changes direction on the 22nd, again symbolising a big turning point for you; it coincides with a balancing and harmonising new moon on the 24th which is great for relationships, especially friendship. It’s also time to make the effort with communication as this is all good groundwork to build from.


Sagittarius
23rd November – 21st December
There are choices to be made this month (in love and relationships?), but rather than waste time weighing pros and cons of each possible path (it’s too much logic and not enough heart), it might be more productive to ponder your values and what really matters to you in life. Making your decision from the confidence and clarity of self-awareness is easy because you know all the answers, it’s just a case of asking yourself the right questions. Mars, planet of desire and action, is in your sign from the 13th, symbolising how ready, willing and able you are to get the ball rolling on all this.


Capricorn
22nd December – 20th January
It’s the kind of month where big changes and important new experiences are probable, not just possible, which might feel exhilarating and daunting in equal measure. To get the most out of this, trust your instincts as well as your logic as it’s the blending of the two that gives you the detailed picture. There’s a strong and sure new moon in your ambition and status chart on the 24th; which suggests significant new beginnings in store for those willing to keep their hearts and minds open. This particularly links to work and career, but includes anything right now where achievement matters a lot to you.


Aquarius
21st January – 18th February
As September gets underway your leadership skills are required, as well as your patience dealing with authority and authority figures. There’s a benevolent full moon in your resources chart on the 9th, which bodes well for income and purchases, and for sorting out stuff with others too, meaning actual ‘stuff’ and emotional. There’s a sense of fate or destiny at times this month, perhaps because there’s coincidence and synchronicity afoot in events and meetings. Make sure you speak your truth, as the wisdom of your experience is there to pass on to others, and (especially around new moon time on the 24th) your path holds great power of new potential right now.

Pisces
19th February – 20th March
It’s a big month for all relationships; in matters of the heart and also contracts or agreements. The full moon in your sign on the 9th is powerful regarding this. Events around that week can confound or heal you, and it’s how you see yourself in circumstances that will make all the difference. Meaning, if you can see how strong you are, despite any limitations, then conflicts heal. But focus on unfair treatment or justice not served, and a frustrating tyre spin effect occurs, and all efforts grind you down further. You have excellent support and back-up this month, and look for new, maybe swift developments (after midmonth, especially 24th).

Posted by Barbara Palliser at 10:29 pm No comments: