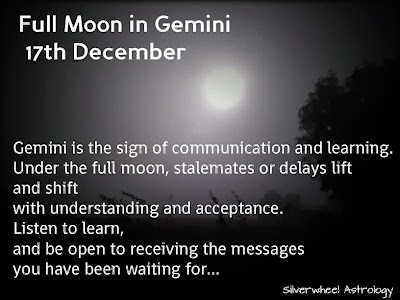 Aries
21st March – 20th April
A meaningful new moon on the 3rd powers up your hunger for travel and education which gets you reconnecting with old dreams and schemes, but maybe the real action starts under the communication-filled full moon on the 17th as delays from months back suddenly lift and you feel your freedom to move forward again. Second half of December is intense at times; career, reputation and status feels so important, as do certain relationships, yet there’s so much you can’t control about certain situations right now. Trust the process when you can, deep breaths when you can’t. You’ll get there.


Taurus
21st April – 21st May
December focuses heavily on travel and broadening horizons in some way, but it’s more like you go on holiday and decide to stay there; or graduate college and immediately return for more learning. Whichever way it manifests for you, the visible turning point, return or reconnection comes after the 22nd when your ruler Venus retrogrades. It then might feel you’ve left an easy path for the road less travelled, but it’s because there’s other ‘stuff’ going on too. The planets depict a less than smooth ride to the end of 2013, but that’s no reason not to keep on moving.


Gemini
22nd May – 21st June
A new moon in your house of relationships on the 3rd symbolises fresh starts and new beginnings, especially linked to friendship (particularly around the 17th). The meaning of it all might elude you till the 10th but after that there’s a refreshing sense of clarity. Finances feel more stable midmonth as long as you don’t go daft, and this is a cosy, comfortable long-term influence too, which along with a protective full moon in your sign on the 17th should see you through any emotionally intense or stormy situations the remainder of 2013 might throw at you ( 25th and 30th in particular for sudden emotional surges)


Cancer
22nd June – 22nd July
December opens with new (and maybe sudden or unexpected) beginnings, symbolised by an adventurous new moon on the 3rd that has its eye on your long-term future. Miscommunication is likely during the first week, but clarity hits around the 10th; then enjoy the feeling of firmer foundations for the future appearing midmonth. Whatever form this takes, it represents a stability you can count on. Career and status suddenly moves forward (or up!) from the 17th, and then the rest of 2013 has a strong theme of relationships. They are emotionally intense and maybe full of changes, but don’t forget that sense of stability from midmonth and count on it.


Leo
23rd July – 23rd August
The holiday season is traditionally most hectic at the end of December, but you might find the most fun happens before that; just because you’re more willing to let your hair down before the 22nd. This is especially true during the first week, when a fun filled new moon on the 3rd beams bright party vibes your way. You are in a much more sensible, even sober mood from the 25th, maybe the pressure to party feels like duty or obligation, or maybe it’s the uber-heavy and intense emotional vibe of certain situations; whatever, you need lots of space and time to unpack it and process it all.


Virgo
24th August – 22nd September
A new moon on the 3rd puts home and family matters under the spotlight, with a new beginning of some sort becoming the focus of your attention. There’s foggy communication first week, but then it’s steady and sure, especially in relationships, whether love or work-related there’s clarity around the 10th followed by sense and sensibility midmonth. From the 22nd you’re in the mood to enjoy yourself; a cluster of powerful planets in the recreational angle of your chart suggests you’re taking your amusement very seriously. It’s a full on kind of final week of 2013 with both highs and lows possible, but you were expecting that somehow anyway.


Libra
23rd September – 23rd October
Good news on the work/ambition front, as the new moon on the 3rd indicates sudden developments while mars the planet of movement and action is in your sign from the 9th. Finances feel settled and sensible midmonth, so there’s something to reassure you no matter how fraught or frazzled the holiday season gets, and it does indeed around 25th and 30th. From the 22nd your ruler Venus retrogrades (appears to move backwards). There are echoes of eight years ago if you look back, and important, if intense, home and family reconnections and reunions.


Scorpio
24th October – 22nd November
Firstly, there’s an underlying stability to December, particularly tangible midmonth. It’s because you’ve been happy to rein things in a bit, be disciplined and a bit more comfortable with less than full steam ahead. So even though the planet patterns symbolise a deep, intense and unpredictable end to the year, there’s something to hold onto or lean into which feels real and solid. There’s a lot revolves around communication and information in all this, maybe secrets are revealed or intimacy deepens (17th?). Or perhaps the cork pops on whatever has been bottled up (25th and 30th). But whatever it is, it leads to positive change and transformation.


Sagittarius
23rd November – 21st December
In general, the world is feeling much more on your wavelength than recently, so it’s easier to feel confidence in your current path. An important new moon in your sign on the 3rd carries a message of fun and good times for you for the whole of December, as well as sudden bursts of creative clarity (especially around the 10th). Midmonth there’s an important long-term linkup between your ruler Jupiter, and Saturn, planet of structure and boundaries; meaning this is a fab time for laying firm foundations, and getting back to basics in order to build your life stronger and taller than ever before.


Capricorn
22nd December – 20th January
Early December has a different flavour to late December. You are initially more reclusive, less willing to waste energy on the outside world (perhaps sensing a need to build energy for later use). Friendship is important to you though, especially midmonth onward, when getting in touch with old faces or places has special meaning. But once the sun moves into your sign from the 22nd, it’s all busy and intense. There’s a lot of challenging planet patterns for late December (25th and 30th in particular), and you’re at the heart of the astro picture, suggesting your full participation is required; so no staring into space or half-listening for you this holiday season.


Aquarius
21st January – 18th February
A new moon on the 3rd impacts friendship, groups and gatherings, suggesting you are off and running during December with new connections and contacts, perhaps most noticeable under the light of the full moon on the 17th. Communication is key (again) for you right now, especially around the 10th and particularly 17th when your ruler, Uranus, moves forward after months of reverse motion, lifting a feeling of limitation or delay. Final week of the year isn’t easy on the emotions; it all feels intense and eventful (especially 25th and 30th); with both ups and downs, lots to process and not much to feel in control of. Roll on 2014.


Pisces
19th February – 20th March
New moon in your career and status chart on the 3rd suggests you’re preparing new plans and projects, with action and developments perhaps coming first to fruition around the 17th. It’s around that time a turning point is reached with finances and resources too, meaning there’s more of a feeling of freedom again, for the first time in months. Friendship and group participation is a focus too; from the 22nd there’s reconnection and reunion, then events around the 25th are unruly or rebellious, revolutionary perhaps. The end of 2013 isn’t exactly a peaceful astro picture; but that’s when a lot can be achieved in a very short time.
Posted by Barbara Palliser at 11:10 pm No comments: