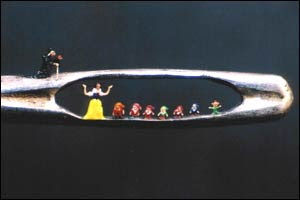 Willard Wigan MBE is an artist who makes sculptures so small they can't be seen with the naked eye, some are so small they are only three times the size of a blood cell. He paints the sculptures with a hair plucked from the head of a housefly, and sets them in the eye of a needle or on the tip of an eyelash.

As a child he had undiagnosed dyslexia, and was made to feel small by teachers who singled him out and told him he would never amount to anything. His response was to run away from school and hide in a shed, watching the ants that lived there. He began constructing houses for them out of splinters, and his obsession with miniature worlds started to unfold, born out of a desire to prove that 'less is more' and that 'nothing could be everything'. And he just sold his collection to date for £11million.

Virgo is the sign which has an eye for detail, and often astrology focuses on the downside of that - the nit-picking, the criticism, the scepticism, the fussing. But when a new moon eclipse comes along in Virgo there's not much time to dwell on the negatives, especially when hard working Saturn has just arrived in this sign, and law-breaking Uranus, the paradox planet that has the power to turn any situation completely on its head, is linking up to the new moon from opposite sign Pisces. The message being, that because in reality anything is possible, now's the time to whittle it all down by choosing what it is YOU WANT to be possible. Scientists and sceptics doubt this artist's creative ability because they don't see how it can be done, but thankfully disbelief didn't dampen his desire to make great things happen out of apparently nowhere.

You can read more on Willard Wigan here
and here
watch an interview here
and here's a YouTube montage of his works:

The 2007 new moon eclipse in Virgo takes place on 11th September at around 1.45pm UK time.

Posted by Barbara Palliser at 11:24 pm

Fascinating. I hadn't heard of Mr. Wigan prior to your post. Incredible. His story and his push to use his skill is a lovely read. Nice post!

Isn't he amazing! I've just added the lovely YouTube video because I can't get enough of those pictures :-) The music to go with it is somehow appropriate for new moon eclipse opposed by Uranus too.

Wow - working only around midnight and in between heartbeats...how poetic. And he's so cute and soulful looking! What a perfect thing to read on this Venus in Leo inconjunct Uranus in Pisces day. I'm entranced! I tried to find his birth date to peak at his chart, but only found the year...

yes, I would love to see his chart, I'll eat my hat if there isn't a strong Virgo thing going on somewhere. I only found the year too.

My goodness! That's amazing, thanks for the links, Barbara.

I expected him to be a frail, delicate-looking person, but he's not, his hands seem quite large - how on Earth?? :-)

Having seen Willard on television this morning, I rushed to Google to find his date of birth. Frustration!
I, too, agree there must be strong Virgo stuff going on but I also think Scorpio/Pluto may well be involved, as the intensity and ability to concentrate is so evident.
What a lovely man, anyway.

missed him on tv! Would like to have seen that. Yes, I agree with the pluto/scorps; if he's of the Pluto in Virgo generation he might be sun conjunct Pluto or something?

You should be able to see Willard Wigan on BBC iPlayer (Sunday Life)when it's posted on their website tomorrow (Monday).
Yes, agree re Sun conj Pluto in Virgo - or could be one of various combinations of 6 and 8?
Good to have found your website while Googling info on Willard!
Would love to find that birth date!
Best wishes.

I saw it! thankyou!! oh to see his chart. It just fascinates me. I think Scorpio/Pluto/8th vibe even more now - that bit when he said he has to turn himself into a 'dead man' to actually do what he does. I wonder Pluto in Virgo in the 5th, or various combinations of... and Neptune for invisiblity! Let me know if you are successful finding that birthdate!